Typically, an exchange has an order book that is comprised of many limit orders. Investors who look through the order book find quantities and prices which match what they are looking for.

The implied volatility of an asset can be derived through the options market for that asset through the Black-Scholes equation.

Which, can be simplified with a formula that is based on the at the money price under normal model approximation.

Which derives an approximation of implied volatility as:

Where S is the price of the underlying asset, V is the price of the call option, IV is the implied volatility, and r is the risk free interest rate. Thankfully, Chainlink oracles in their upcoming V2 will be providing this data through their API, making it consistent, reliable and easy to use without having to calculate advanced quantitative financial models.

Given their implied volatility is not out yet, it is hard to determine what form they will present their metric. Specifically, how long in the future the option expires. What ever the length of time, log returns, or percent, we can map this value to the normal distribution to dynamically calibrate transaction fees to reduce arbitrage loss to the 3 $\sigma$ range (or set this as a governance parameter).

Ultimately it would be optimal to have some sort on value change to respond to, like the 0.5% price movement update, but until the API is out the exact nature of this variable will be unknown.

An asset with an average price of 100 and a higher volatility ($\sigma$ = 0.5). Can now use the implied volatility feed to re calibrate its transaction fee to minimize the possible arbitrage opportunities, no matter the volatility.

In any liquidity pool the Root Token is the desired token to be traded, paired against the Native SDEX token. The Native Token is always SDEX.

As you can see, the transaction fees fluctuate on the maker and taker side as the pool becomes imbalanced from regular transactions. This concept provides greater incentives for arbitragers to come in and bring the pool to an equilibrium state.

The rebalance variable r is a set parameter which calls for a rebalance when k has reached a certain curve value. When called, the smart contract will attempt to replenish the pool with assets which were reserved through penalties.

In contrast to the traditional model, the CFMM model utilizes an order book where all liquidity is pooled into one. We then calculate prices algorithmically using a constant product mechanism. In this style of AMM system, the liquidity available on both sides of the potential trade are multiplied together, and that pool value is held constant while being used to determine the price of transactions that occur within the smart contract.

We begin with a liquidity provider depositing 10 BTC and 500 ETH into the contract. The pool then becomes: 10 * 500 = 5,000 and is the value of the pool we use for calculating the exchange rate of all trades that occur using the smart contract.

Now another ETH buyer steps in and wants to trade their 2 BTC for ETH. The pool of BTC gets pushed up even more from 11 to 13.

Given that exchange rates are driven solely by the pool, this means the next trade will receive a slightly different rate.

This makes the market more efficient as spreads decrease over time as trading imparts price knowledge and subsidizes liquidity.

See the chart below for a graphical depiction of this relationship. As the size of the purchase increases, the exchange rate becomes less favorable. In this way, the end result ultimately bears some similarity to traditional markets where market participants see the market moving against them as they trade more aggressively. 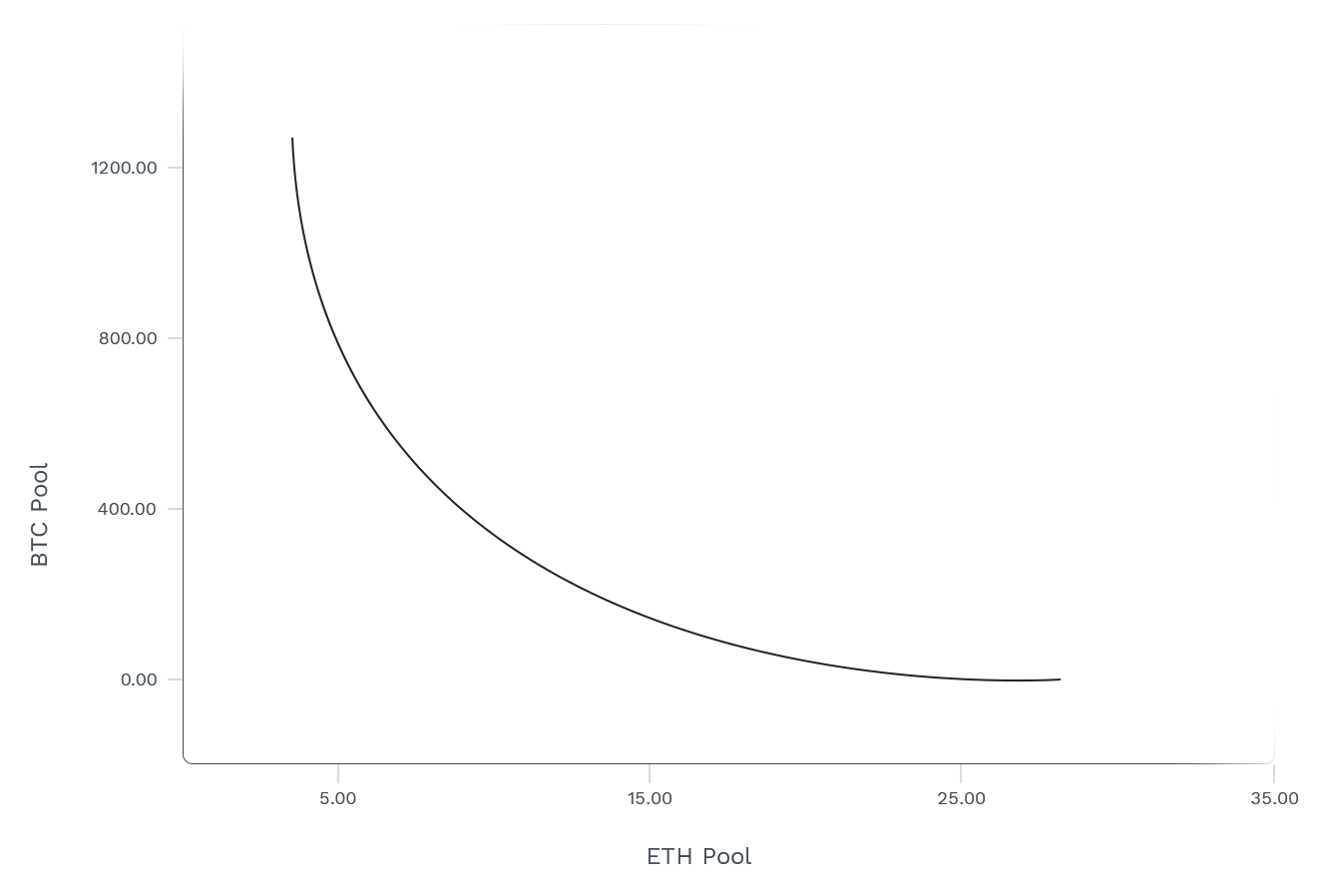 Setting order minimums. By only allowing trades above a certain threshold we eliminate non-optimal arbitrage problem. Although arbitrage is necessary for bringing pricing to equilibrium, there are certain cases that can affect the protocol negatively.

We have found a dynamic automated market maker to be a more applicable model for the Sigmadex on-chain liquidity protocol. Even though current applications such as Uniswap have exceptional adoption, there are still many areas of optimization for decentralized swaps. Sigmadex aims to enhance liquidity and retain a balanced ecosystem by merging several mathematical models to compliment the facilitation of token swaps.